You've all pictured it. One day you're living your happy go lucky life then you end up in a car wreck, getting shot, or a plane crash. The next thing you know you wake up in a hospital gown, in a hospital bed, in a hospital room alone. You pull out the tubes from your arms (which apparently doesn't even cause you to flinch despite ripping 1 inch long imbedded needles out from under your skin). You stumble around a deserted hallway continuing the stumble out into an empty parking lot filled with abandoned vehicles, some of which look pretty banged up. You think to yourself, what the hell did I miss?

You hear someone approaching you from behind so you whip around to find a mangled human whose jaw seems to be missing as is half their hair. They're limping toward you reaching out for what you think is help. You move in closer to get a better look since you have some morbid fascination with this decomposing creature and you live to regret the slip in sense when the woman lunges at you. She spits blood and bile at you as she starts aiming her mouth for your neck. Then she starts aiming for your chest. Then your arm and you start thinking "This woman wants to eat me." You're able to toss her off of you and grab the nearest rock swinging at her head. You strike it once and it does nothing to dissuade her attempt at making you her breakfast. You hit her again and again and again until finally she stops moving, her head bashed in beyond recognition and the foul stench of death strewn all over your hospital gown. In comes the melancholy music of doom as the camera pans out conveying the loneliness and confusion you feel. The realization hits you. It's December 22nd, 2012 and the Mayans were right! It's the Zombie Apocalypse.

I know some of you are asking yourselves, what the hell does this have to do with anything? Well, stick with me. The first rule in Zombieland? Cardio. What's the first rule in Warrior training? Cardio. If you get winded in a fight you are almost guaranteed to lose. While the average street fight lasts seven seconds there are fights that go on for minutes. Watch the energy expelled during a muay thai or boxing match. There are times when at the end of the first round both are breathing heavily. Then they're taking hits to the face. How quickly can you think when you have just taken a beating and can't catch your breath? On top of utilizing the energy to fight back imagine having to run from your attacker. So, yes, cardio is extremely important to the Warrior.

Second rule in Zombieland? Double tap. I’m sure those reading my blog are aware of what double tap means, but for those who don’t it is when you shoot your enemy and assume they're dead. You place another shot in their head just to make sure they are actually dead because you never know when they will pop up and come grabbing for your ankles. While this isn’t necessarily a rule for Warrior training it does bring up two other subjects. Weapons and awareness.

We can learn a lot from Woody Harrelson’s character Tallahassee. The man made an art out of killing zombies with whatever was around. I bet you'll never look at a banjo in the same way again! In Resident Evil: Afterlife Milla Jovovich’s character Alice uses stacks of quarters in lieu of shotgun shells. Warriors should be aware of everything of use around them. Look around you right now. If you were attacked what could you use as a weapon? A pencil? Scissors? A shovel? Now, where could you hide? Where are the exits? If someone you cared about was with you how would you defend them? Everything is a potential weapon and everything can aide you in an escape - just think outside the box.

In Dawn of the Dead, the survivors got supplies from and took up shelter in a mall. In Resident Evil: Afterlife they got what they needed from a prison. Zombieland they took supplies from wherever they could find including what they thought were abandoned mansions. On a Warrior's mind should be some very simple questions - where would you go to get needed supplies like food, ammunition, and survival gear? What could you easily carry with you? Once those supplies run out can you survive on what the land has to offer? Do you know what plants are deadly and what could sustain you? Do you know how to hunt and prepare game meat? Do you know how to combat weather conditions and keep yourself warm or from becoming over heated?

In a Warrior's world, these questions are common place. Looking to ancient Warriors and even some modern soldiers their survival relies upon what they can find in nature to eat and the skills they pick up to keep themselves from having the elements cause their deaths. The Warrior mentality doesn't just include how well you can defend yourself, but how long you can survive with minimal supplies and your knowledge of the land. A war isn't generally hours long, it's days, weeks and years of grueling conditions, supply conservation and planning. This common scenario ring a bell with every Zombie movie you can recall?

So like the common trend goes I personally find myself utilizing the impending end of the world scenario to dictate some of my focus while training on my path. It’s partly as a joke, partly because my husband is obsessed with Zombies, and partly because it is actually good sense. With all the questions posed above we realize that movies like Zombieland, Dawn of the Dead, and the Resident Evil series make you ask yourself one very important question - could you survive? Are you Warrior enough? ;) 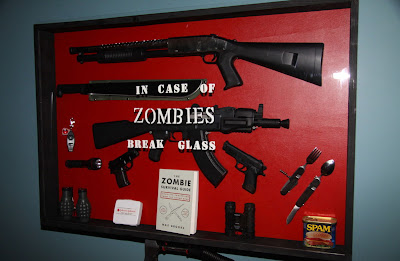 *Disclaimer - I AM NOT AN EXPERT. The views expressed here are solely the opinion of the author and any use of any techniques mentioned here are expressly addressed for self defense purposes only and the practice there of. Don't go out and beat up some random person then tell the cops my blog told you to do it!

Also, nothing replaces learning hands on with a professional instructor. If you seriously want to learn self defense or a martial art I HIGHLY recommend seeking out training from an expert in your local area. Never attempt weapons training on your own. All weapons are meant to cause damage and should be respected as such. Seek out an experienced instructor before training.

Promote Your Page Too